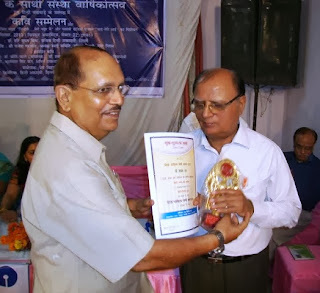 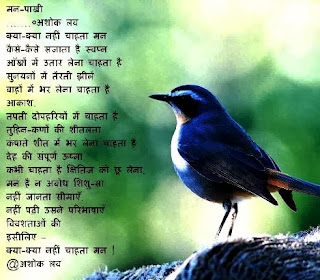 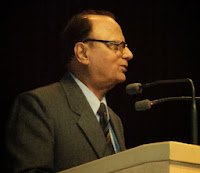 It was a great literary and theatrical evening at National Law University, where plays and poetry together were staged by the students and the poets of the community.  Classical plays like Antigone, a tragedy written by Sophocles in Ancient Greece, Merchant of Venice a of William Shakespeare, The benefit of the doubt , published in 1913 by Jack London etc  were depicted by the students. According to Dr Prashananshu, the themes of plays revolved around the questions of justice, society and law. “The actors did not stick to the script religiously, and their ingenuity and innovation at times brought about unexpected and mostly delightful new interpretations of the original work. The unusual theme of the drama event was ‘Law and Literature’. It was a step to combine law, theatre and students at stage together,” said Prashananshu.

A workshop cum poetic evening was also organised at National Law University in which eminent poets from the city and also other parts of Delhi participated and recited their creations. According to the organizers, the concept of the poetry workshop was to initiate young people into the art of giving an expression to their feelings and thoughts by means of poems. Poets like Dr Ashok Lav, Dr Vivek Gautam,  Prem Bihari Mishra,  Rakesh Pandey, shared their views on poetry, and more specifically on the connect between law and poetry. Thereafter, Dr Prasannanshu, Associate Professor of English of NLU conducted a workshop on poetry writing, which evoked enthusiastic response from the participants.
Also on the occasion poets like  Dr Chandramani Brahamdutt,  Sushma Bhandari,  Vinita Malik, Virendra Kumar Mansotra, Vijay Saluja, Dr P Prasannaraj, MK Sinha, Shobhna Mittal etc. made their presentations. Dr Ashok Lav chaired the event, and Prem Bihari Mishra managed the stage. The theme of event was Law and Poetry.
The registrar of the University, Professor Srikrishna Deva Rao inaugurated the event with words of appreciation, and encouragement.
प्रस्तुतकर्ता Ashk पर 11:45 am No comments:


‘Sukh Dukh Ke Sathee’Sanstha, an association of senior citizens dedicated for social cause, celebrated its Annual Day with full gusto in Community Hall of Chitrakoot Apartments in Sector-22, Dwarka (Delhi). On this occasion, President of the Sanstha, Vijay Shanker Singh elucidated aims and objectives of the Sansthaand impressed upon need of the time to live in harmony with mutual co-operation.General Secretary of the Sanstha Shri Shashi Kant Kapoor gave account of the activities of social welfare carried out by the Sansthaduring past one year and the Vice President Capt S.S. Mann elaborated the future plans. Chief Guest of the function Shri Jagmohan Mishra, Member Telecom Board and Ex-officio Secretary of the Government of India expressed immense pleasure on performance of the Sanstsha.Col P.C. Chaudhary, Jt. Secretary delivered vote of thanks.Convener of the programme D.C. Mathur conveyed special thanks for the help rendered by State Bank of India, Sector-23, Dwarka, for organizing this programme.

‘Kavi Sammelan’ was also organised by the Sanstha on this occasion, with the help of ‘Society for Creatives’. The secretary of Hindi Academy Delhi, Dr.Hari Suman Bisht, who himself is a renowned poet and writer, was the chief guest in this poetic meet where as Mr. Rajesh Gehlot, Chairman Standing Committee SDMC, participated as a guest of honour. Dr. Ashok Lav, a well-known writer, who has written more than a 100 books in Hindi, read poems from his books, and summed up the meet with his comments on the poets, in his presidential address. Dr Shabana Nazir and Ashok Verma famous for their ghazals as well as Satya Dev Haryanvi, the famous humorous poet, recited various creations in their characteristic styles and earned appreciation of the audience.Dr Kirti Kale conducted the programme and recited poems with her melodious voice, 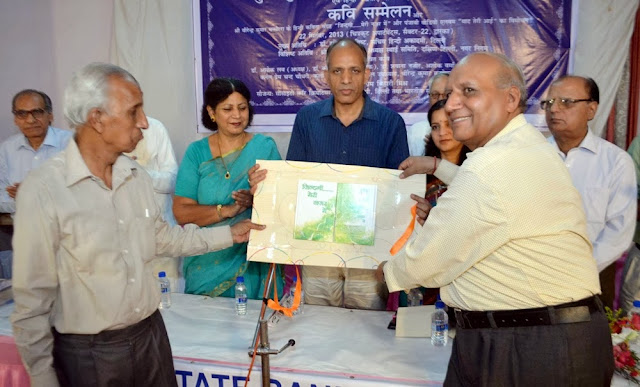 The highlight of the event was the release of a poetry book  , ज़िंदगी मेरी नज़र में and a video Punjabee album  याद तेरी आई of Virendra Kumar Mansotra by the Chief Guest. Prem Bihari Mishra’s rendition of his meaning-laden poems in a musical way provoked prolonged applause. Around a dozen poets attended the meet and presented their works: amongst them were Dr.Prasannanshu of the National Law University, Suresh Yadav, Anil Upadhyay, Anurag Ranjan Singh, Col Prem Chand Choudaryand Kulvinder Singh Kang. The TV Channel ‘DD India’ of Doordarshan will telecast copious glimpses of this poetry meet on 4th October 2013 at 11.00 a.m., 18.30 p.m. and 02.00 am (next day) in the programme ‘Yours Truly’. 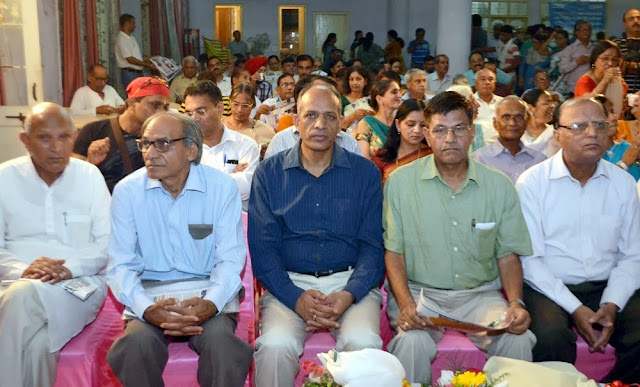 The enthusiastic reception meted out by the residents of Dwarka was heartening: the poetry meet extended late into the night, well into the vicinity of midnight, but the audience of more than 200 who attended the function constantly applauded and listened with rapt attention till the very end.

It only shows the receptiveness of the literature-loving public of Dwarka: let us hope that this initiative continues, and Dwarka, known for many good things becomes centre of literature and culture, too. Shri Rajesh Gehlot and Secretary of Hindi Academy, Dr.Bisht , both on their part pledged support for the continuance of such literary events.Poetry-loving Dwarkites certainly look forward to many more similar cultural opportunities.[ DWARKA PARICHAY --25th September 2013 ]
प्रस्तुतकर्ता Ashk पर 7:08 pm No comments: 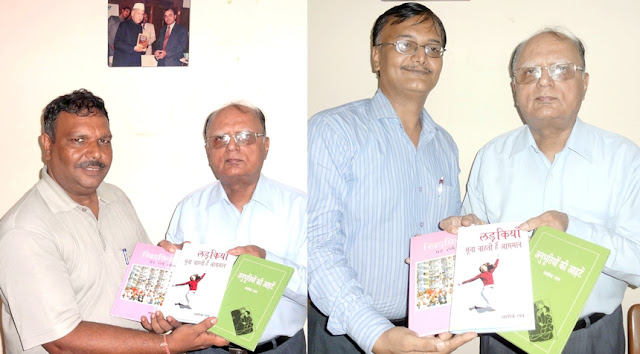 “Sukh Dukh Ke Sathee”, a socio-cultural association of senior citizens, conducted a “Kavya Sandhya” on 19 May in Sector-4,Dwarka, New Delhi. on the behest of Lions Club.The programme was organized and conducted by Hindi poet Prem Bihari Mishra. “Kavya Sandhya” was presided by Dr. Ashok Lav, a legendary author of more than 100 books and recipient of about sixty honours and awards.

Narrating background of the programme, Shri Mishra informed that “Sukh Dukh Ke Sathee” have taken up a new mission of its own kind. There is lot of poetic talent in the society which goes unnoticed and unexposed in absence of a suitable platform..“Sukh Dukh Ke Sathee” have decided to explore, organize and support such talent by holding fortnightly kaya goshthees. The inaugural kavya sandhya  was organized in the in Dwarka Sector-22 on 28th April presided by Dr Ashok Lav.The chief guest was renowned litterateur and international educationist Dr. Harish Naval.

Shri Mishra  informed that Dr. Ashok Lav has rendered his full support in this venture. We are fortunate that many literary icons have joined us. He expressed hope that more and more people and social organizations will join hands to strengthen this noble service of Hindi literature.
The “Kavya Sandhyas” were set off with a melodious ‘Saraswati Vandana’ of Shri Prem Bihari Mishra.

Everybody present in the programme felt delighted with heart touching illustration of the Chief Guest Dr. Harish Naval about affection and selfless sacrifice of parents so also his poem ‘ek hote the babuj aur ek hua karti thi amma’. He also presented an impressive review of the poems presented by all the poets.

Dr. Ashok Lav, who presided the programme, said in his concluding address that Shri Prem Bihari Mishra has given start to a praise worthy endeavour and we are with him in his noble mission. President of “Sukh Dukh Ke Sathee”
Shri Vijay Shanker Singh said in the end that we will continue with such programmes and conveyed thanks to Dr Ashok Lav , Dr Harish Naval ,poets , audience and especially Shri Prem Bihari Mishra for his initiative. 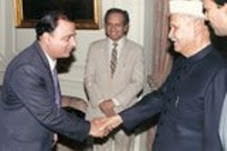 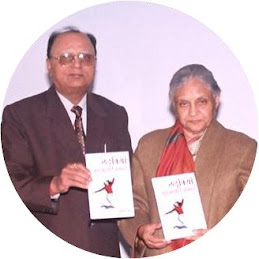